Conspiracies: It Is Impossible to See Ostriches Hiding Their Heads in the Sand

Imagining a world of shadow governments and puppet-masters is the ultimate power trip. It makes you smarter than everybody else; you can detest the dormant half-wits, who still believe in what they are told. Pro-Kremlin disinformation outlets simply adore the concept of the Big Conspiracy. South Front, a Russian site published in English, has dozens of articles, referring to “The Matrix” – the 90’s Hollywood movie, where humankind is trapped by intelligent machines in a synthetic world. Only a few have managed to wake up and are waging a war against the machines.

South Front’s “Matrix” is, depending on the contributor, “The Rich“, “Western Intelligence Services“, “The Democratic party in the US“, “The Washington Empire“, “Western Ziomedia“, “The Government“. The “puppet masters” are defined along leftist concepts of class or libertarian concepts of “Big Government” or rightist ideas on race. South Front is happy to give room to anyone, questioning the legitimacy of any Western government.

Questioning conspiracies is like attempting to prove that ostriches don’t hide their heads in the sand to make themselves invisible. “Have you ever seen an ostrich with its head in the sand? No? So that proves it – it works!” Conspiracy theories work the same way: the absence of evidence is the proof. “The Deep State is so powerful that it manages to hide all tracks of it!” 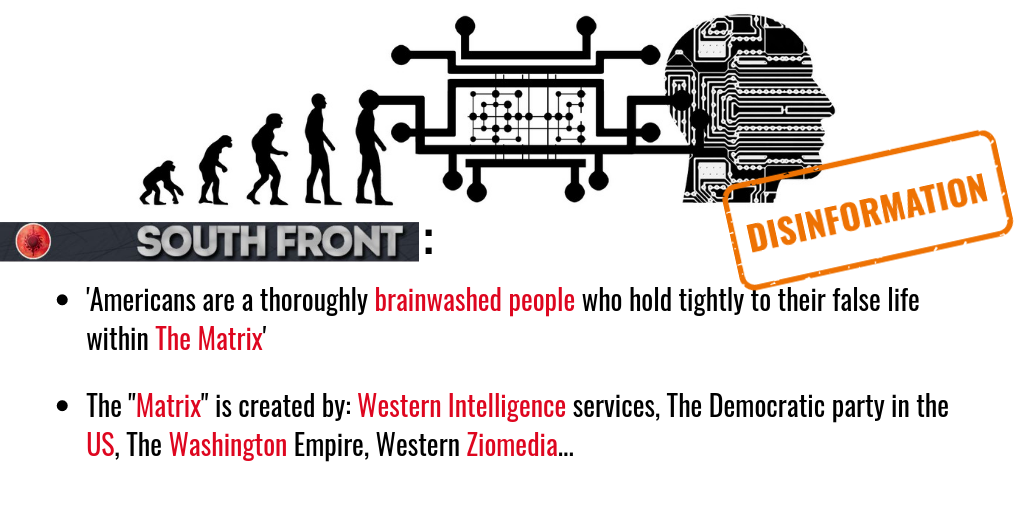 Pro-Kremlin disinformation outlets are generally very generous about WHAT they publish. Lies, truths, leftist, rightist, anti-Semitic, islamophobic – anything goes. Even Lenin said that a newspaper is not only a collective propagandist and a collective agitator, but also a collective organiser. Lenin set up a distribution network for his newspaper, the Iskra, to smuggle it into Czarist Russia. Very few copies of the paper ever reached a reader, but the network proved to be a great fundament for building an underground party.

This is why we can see virtually anything on the pro-Kremlin disinformation platforms:

Strategic Culture Foundation, another English-Language pro-Kremlin disinformation outlet, is publishing articles with an anti-Abortion agenda. “Are Abortion and Gay Rights Really American Values?”, asks this Russian outlet. Another article comments on the reactions to the recent anti-abortion legislation in Alabama in the following way:

What we are seeing in this hysteria is not some sort of everyday wedge-issue bantering, but actually a crisis of Liberalism itself, which could be extremely dangerous for the future of American civilization.

Or this way, on the referendum to modify legislation on abortion in Ireland:

That’s why once-Catholic Ireland felt the need in a recent referendum to modify protective language in its constitution so they could be like the rest of the chic free-thinking countries in the European Union.

We see how “Pro-Family Programs in Eastern Europe Drive the Liberal West Mad”:

We can actually see society begin to heal from the mental wounds of the “Sexual Revolution”. These policies are steps in the right direction, but sadly we are still very far from being able to consider “mom” as a profession that is as important to society as cops, infantry, and doctors.

Interestingly, this editorial policy contradicts official Russian positions on abortion. While there is an opinion in Russia, just as anywhere else, suggesting a ban on abortions, the Ministry of Health is publicly very much against. Deputy Minister Tatyana Yakovleva has ruled out any plans of limiting the rights to abortion: “A ban would increase maternal mortality and infant mortality, and it will lead to criminalisation of the issue. It is out of the question“.

There is a similar pattern in other English-Language pro-Kremlin disinformation outlets. News Front even praises Adolf Hitler and offers a platform for anti-Semitic propaganda. Again, this is far from the Kremlin’s position. Texts like that would generally not be acceptable in Russian. 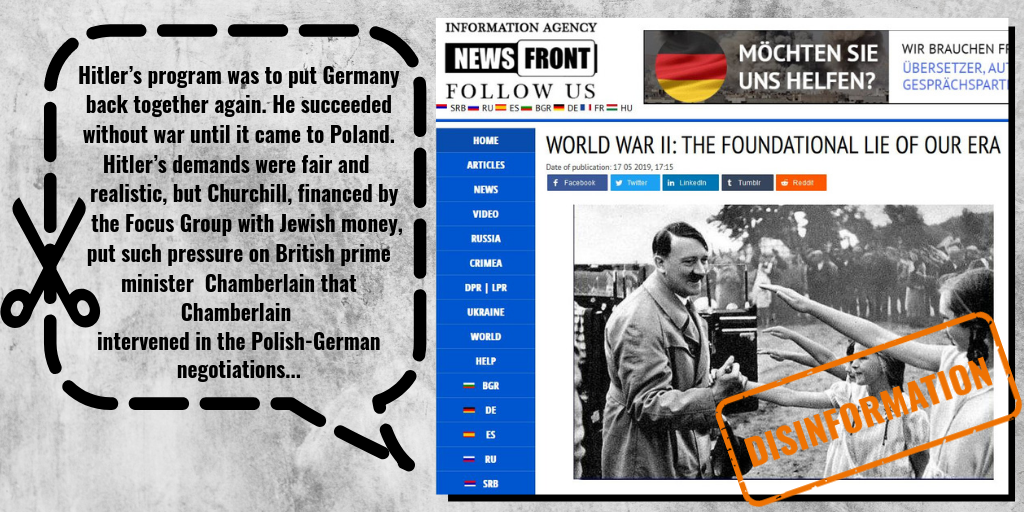 The same can be said about several other topics: migration, for instance. Russia is a country with very large migration – according to Russian statistics, 9.79 million foreign nationals are officially present in Russia; most of them are labourers from the former Soviet republics of Central Asia and Caucasus. Russia is the country in Europe with the largest Muslim population, and Russia’s President Vladimir Putin has mentioned Islam as a “Clear element of Russia’s cultural code“. Nevertheless, the threat of migration in Europe is a favourite object in pro-Kremlin disinformation outlets, and there is no shortage of articles suggesting that Europe is on the verge of a “Muslim takeover”.

Why are pro-Kremlin disinformation outlets contradicting Moscow policies and Russian realities? The answer is obvious: to attract readers. Abortion, Migration, Islam: all are “hot” topics in various parts of the world outside Russia. All are united on the Kremlin’s platforms.

Anti-migration, anti-Semitic, anti-Islamic, anti-anything groups and activists can find and share and publish content on Russian disinformation outlets like RT, Sputnik, Strategic Culture Foundation and South Front. “Mainstream media” and “Corporate media”, on the other hand, are said to censor any kind of dissent.

Who Cares about Russia?

Who is piggy-backing whom? Are activists, be they right-wing, leftist, pro-life or pro-choice, exploiting RT, South Front, Sputnik or other Kremlin outlets as platforms? Or is the Kremlin exploiting the activists? Moscow-based South Front recently published an article by a US activist, describing herself as “socialist”, and defending the use of RT as a platform:

It doesn’t take any amount of sympathy for Russia to see that the unipolar empire is toxic for humanity, and most westerners who oppose that toxicity have no particular feelings about Russia any more than they have about Turkey or the Philippines. Sometimes Russia will come in and give them a platform in the void that has been left by the mainstream outlets which are doing everything they can to silence them. So what? The alternative is all dissident voices being silenced. The fact that Russia prevents a few of them from being silenced is not the problem. The problem is that they are being silenced at all.

In short: Who cares about Russia? Self-proclaimed progressives and alt-right groups have joined forces around the myth about the “Mainstream Media” silencing or suppressing “dissenting” voices; gratefully accepting these alternative platforms; “questioning more” in a very selective way. As a result, citizens’ trust in media, in state institutions, in the social contract, is challenged. Democracy is undermined and society – polarised.

Surrender to Russia & Control Georgia: StopFake with Marko Suprun (No. 241)

Russian propaganda spreads conspiracy that coronavirus could be designed to kill…

Disinformation sharpened tensions between Serbia and Montenegro as media…